PDF Version
Customers can now place any order on Messenger, just in time for the big game

, /PRNewswire/ --  (NYSE: DPZ), the recognized world leader in pizza delivery and digital ordering platforms, has its game face on and is bringing even more robust ordering capabilities to Facebook Messenger. Customers can now place any order for any menu item they'd like on Messenger, just in time for – one of Domino's busiest delivery days of the year. Domino's is the first national pizza chain to have full ordering capabilities on Messenger. 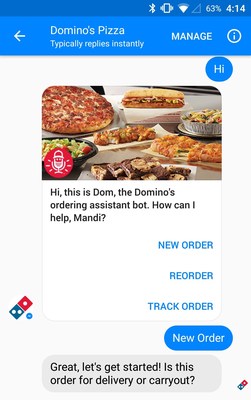 "Prior to today, customers with a Pizza Profile were limited to placing their most recent order or Easy Order via Messenger," said , Domino's senior vice president and chief digital officer. "Now anyone, especially those watching the big football game, can place any order for any menu item they want – no Pizza Profile needed – thanks to Dom, our enhanced ordering assistant bot."

As if full ordering on Messenger isn't cause enough for celebration, customers who order on Messenger will receive 20 percent off every menu-priced item in their order when they ask to redeem the coupon for the deal.

"Football teams strive to get better and maintain their winning edge, and Domino's is no different," Maloney said. "Launching Messenger ordering with Pizza Profiles was a great first step, but Dom's ordering capabilities are continuing to advance as Domino's AnyWare technology evolves. We think of ourselves as a brand in progress and wanted to create an even bigger and better ordering experience for customers."

As the and football teams get ready for their biggest Sunday of the season, Domino's is preparing for it as well. Domino's expects to sell more than 12 million pizza slices nationwide on game day – about five times more than on a typical Sunday.

About ®
Founded in 1960, is the recognized world leader in pizza delivery, with a significant business in carryout pizza. It ranks among the world's top public restaurant brands with a global enterprise of more than 13,200 stores in over 80 markets. Domino's had global retail sales of over in 2015, with more than in the U.S. and nearly internationally. In the third quarter of 2016, Domino's had global retail sales of nearly , with over in the U.S. and nearly internationally. Its system is comprised of independent franchise owners who accounted for over 97% of Domino's stores as of the third quarter of 2016. Emphasis on technology innovation helped Domino's reach an estimated annually in global digital sales at the end of 2015, and has produced several innovative ordering platforms including Facebook Messenger, Samsung Smart TV®, Apple Watch, Amazon Echo, Twitter and text message using a pizza emoji. In late 2015, Domino's announced the design and launch of the DXP®, a purpose-built pizza delivery vehicle, as well as Piece of the Pie Rewards™, its first digital customer loyalty program.

To view the original version on PR Newswire, visit:http://www.prnewswire.com/news-releases/the-ultimate-game-changer-dominos-adds-full-ordering-on-messenger-300399778.html