Domino's® to Commemorate the Opening of its 17,000th Store

, /PRNewswire/ --  (NYSE: DPZ), the largest pizza company in the world based on global retail sales, will commemorate the opening of the brand's 17,000th store in the world with a special celebration on . The milestone store celebration will take place at Domino's, located in Bradbury, . 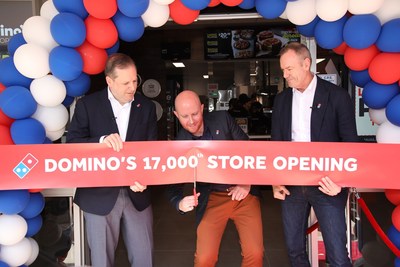 "Domino's opened its first international store in in 1983. We've come a long way since then, and I'm incredibly proud to announce the opening of our 17,000th store in the world," said , Domino's chief executive officer. "This achievement is a true testament to how hard Domino's has worked and truly is a reflection of the success of our global brand."

, the Group CEO and Managing Director of Domino's Pizza Enterprises Ltd, will join , Domino's Pizza Enterprises Ltd. CEO of , in commemorating the milestone store with a ribbon-cutting ceremony at (AEDT). Domino's Bradbury will celebrate by giving away free pizza* and a total of AUD**. From , the store will be serving up free pizzas to carryout customers, with seventeen of those pizza boxes featuring a hidden "" on them, worth ,000AUD in cash.

"It's an honor to celebrate this global milestone right here in Bradbury," said Meij. "This store opening represents our commitment to international growth and development. We look forward to continuing our global growth momentum by opening even more stores closer to our customers and serving up high-quality food to local residents."

Domino's Bradbury is located at Shop 3a/, Bradbury, NSW.

Domino's had global retail sales of more than in 2019, with over in the and nearly internationally. Domino's operates in more than 90 markets around the world.

*Customers are limited to one free value range pizza per person from 12 – on at Domino's Bradbury. The official opening ceremony starts at (AEDT).

About ®
Founded in 1960, is the largest pizza company in the world based on retail sales, with a significant business in both delivery and carryout pizza. It ranks among the world's top public restaurant brands with a global enterprise of more than 17,000 stores in over 90 markets. Domino's had global retail sales of over in 2019, with over in the and nearly internationally. In the fourth quarter of 2019, Domino's had global retail sales of over , with over in the and over internationally. Its system is comprised of independent franchise owners who accounted for 98% of Domino's stores as of the fourth quarter of 2019. Emphasis on technology innovation helped Domino's achieve more than half of all global retail sales in 2019 from digital channels, primarily online ordering and mobile applications. In the , Domino's generates over 65% of sales via digital channels and has developed several innovative ordering platforms, including those developed for Google Home, Facebook Messenger, Apple Watch, Amazon Echo and Twitter – as well as Domino's Hotspots®, an ordering platform featuring over 200,000 unique, non-traditional delivery locations. In , through an announced partnership with Nuro, Domino's furthered its exploration and testing of autonomous pizza delivery. In late 2019, Domino's opened the Domino's adjacent to its headquarters in , to fuel continued technology and operational innovation – while also launching its GPS technology, allowing customers to follow the progress of the delivery driver from store to doorstep.