Domino's® to Celebrate the Opening of the Brand's 18,000th Store

, /PRNewswire/ --  (NYSE: DPZ), the largest pizza company in the world based on global retail sales, is celebrating the monumental grand opening of the brand's 18,000th store in the world today in . 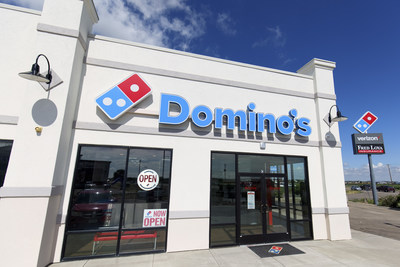 "This is a remarkable milestone for Domino's, and I am thrilled it is happening in ," said , Domino's CEO. "We've grown our total global store count by more than 5,100 stores in the past five years, and we couldn't be more ecstatic to commemorate the brand's 18,000th store in the world, right here in ."

The commemorative 18,000th store, located at , will host a ribbon-cutting ceremony with Allison; , Domino's executive vice president of operations and support; La Junta Domino's franchise owner ; and other key company executives on at Bailey will also present a donation to , in honor of the 18,000th store.

"I'm honored to have the store be a part of this milestone and I'm thrilled that we are able to give back to an organization that does such tremendous work in the local community," said Bailey. " provide food and emergency relief to those in need and I'm so grateful our Domino's team can help support their mission."

is a nonprofit organization that assists low-income individuals and families who find themselves in desperate situations. The organization was established in 1980 and is funded through donations, grants and government programs.

Founded in 1960, is the largest pizza company in the world based on retail sales, with a significant business in both delivery and carryout pizza. It ranks among the world's top public restaurant brands with a global enterprise of more than 18,000 stores in over 90 markets. Domino's had global retail sales of over in 2020, with nearly in the and over internationally. In the first quarter of 2021, Domino's had global retail sales of over , with nearly in the and over internationally. Its system is comprised of independent franchise owners who accounted for 98% of Domino's stores as of the end of the first quarter of 2021. Emphasis on technology innovation helped Domino's achieve more than half of all global retail sales in 2020 from digital channels. In the , Domino's generated more than 70% of sales in 2020 via digital channels and has developed several innovative ordering platforms, including those for Google Home, Facebook Messenger, Apple Watch, Amazon Echo, Twitter and more. In 2019, Domino's announced a partnership with Nuro to further its exploration and testing of autonomous pizza delivery. In mid-2020, Domino's launched a new way to order contactless carryout nationwide – via Domino's Carside Delivery®, which customers can choose when placing a prepaid online order.