ANN ARBOR, Mich., August 21, 2006 – Domino's Pizza® (NYSE:DPZ) used all of the right ingredients to cook up an exciting NASCAR weekend at Michigan International Speedway (MIS) this weekend. On the racetrack, Michael Waltrip drove the No. 55 Domino's Pizza Brownie Squares Dodge Charger in the company's debut appearance as a NASCAR NEXTEL® Cup Series team sponsor. And off the track, Domino's dished up weekend-long entertainment and product sampling events for more than 250,000 NASCAR race fans featuring the introduction of its new bite-sized Brownie Squares and Fudgems, the spokes-character for the brownies.

As crowds arrived at the racetrack they encountered Domino's Pizza street teams and frequent flybys from a Domino's Pizza airplane, promoting the special weekend-long Brownie Squares sampling event at the Domino's Pizza display area. The giveaway attracted tens of thousands of race fans, who may have come for the free brownies but stayed for special appearances by NASCAR NEXTEL Cup Series drivers Michael Waltrip, Jamie McMurray and Bobby Labonte. Also featured in the display were pizza-making races, an interactive Domino's Pizza showcar display, and special photo opportunities with the new Domino's Pizza spokes-character, Fudgems.

“The initial feedback we received this weekend have made Brownie Squares an instant front-runner in the eyes of race fans,” said Ken Calwell, Domino's Pizza executive vice president and chief marketing officer. “We expect the excitement of this weekend to carryover into the launch of our national TV promotion on Monday and take Brownie Squares all the way to Victory Lane.”

In all, Domino's delivered more than 60,000 Brownie Squares throughout the weekend, which deemed the event as the “Racing World's Largest Brownie Break.” 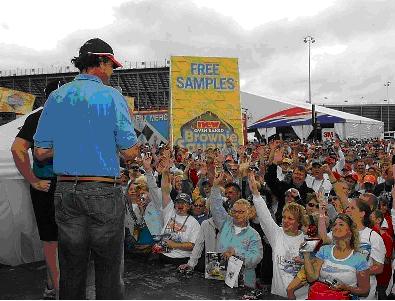 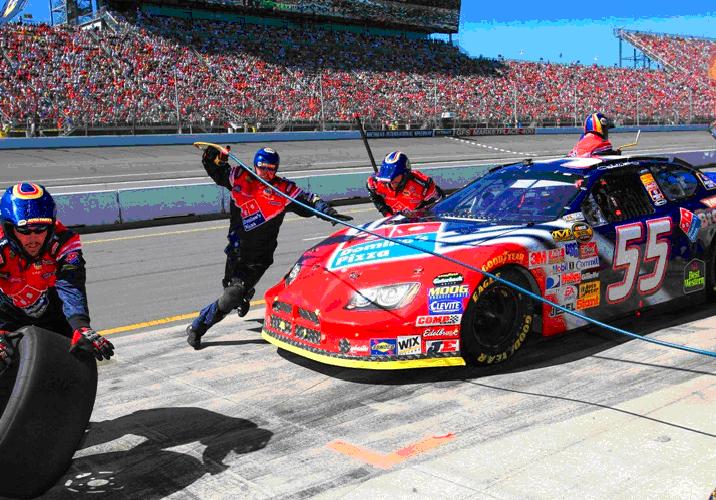 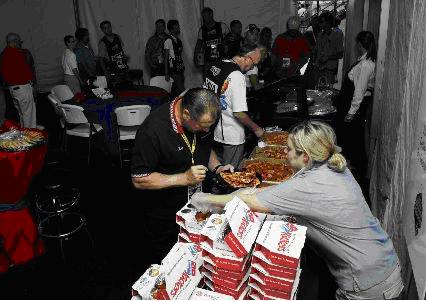 On Sunday, Michael Waltrip and the No. 55 Domino's Pizza Brownie Squares Dodge Charger team were primed for action as they started the race from the 22nd position – Waltrip's third best starting spot of the 2006 season. Waltrip drove a smart, steady race through an afternoon that was interrupted with a racetrack record 10 cautions. He kept the nose of his Domino's vehicle clean and allowed good pit support from his team to help him climb to within the top-10 cars early in the race. As race conditions continued to evolve later in the afternoon, the Domino's crew made adjustments to the car to help keep Waltrip running strong, and the veteran driver picked up several spots in the closing laps of the race to finish 23rd.

“This was a big weekend for our team, and for Domino's Pizza,” Waltrip said. “I'm so proud to be the driver that brings them to NASCAR NEXTEL Cup Series racing as a primary team sponsor. Everyone at the track this weekend saw the amount of excitement that Domino's brings to the sport, and I think you're going to see some big things continue to come from our partnership through 2007. We're really looking forward to getting them that Brownie Square celebration in Victory Lane.”

About Domino's Pizza
Founded in 1960, Domino's Pizza is the recognized world leader in pizza delivery. Domino's is listed on the NYSE under the symbol "DPZ." Through its primarily franchised system, Domino's operates a network of 8,190 franchised and Company-owned stores in the United States and more than 50 countries. The Domino's Pizza® brand has been named a Megabrand by Advertising Age magazine, and had global retail sales of nearly $5.0 billion in 2005, comprised of approximately $3.3 billion domestically and $1.7 billion internationally. Domino's Pizza has been named "Chain of the Year" by Pizza Today magazine, the leading publication of the pizza industry and is the "Official Pizza of NASCAR®." More information on the Company, in English and Spanish, can be found on the web at www.dominos.com.