, /PRNewswire/ -- More than 5,000 spectators cheered as Pali Grewal triumphed as the 2014 World's Fastest Pizza Maker.  Grewal, a franchise owner from the made three large pizzas in an impressive 32.28 seconds.  That's making three pizzas in less than 11 seconds each!  Grewal won in prize money, a trophy and the coveted title of World's Fastest Pizza Maker presented by Domino's President and CEO, .

To view the multimedia assets associated with this release, please click: http://www.multivu.com/mnr/7226151-domino-s-pizza-crowns-world-s-fastest-pizza-maker

"I am elated that I have won the ," said Grewal. "The competition gets stronger and stronger every year that we compete and I train hard to come out on top.  I had no intention of letting the title go."

The finalists represented stores from around the world.  They had to hand-stretch fresh dough, sauce and top three large pizzas – one pepperoni, one mushroom and one cheese – as quickly as possible.  While speed was important, it was only part of the equation in determining the World's Fastest Pizza Maker.  Quality was scrutinized as four judges, highly qualified in Domino's standard pizza-making practices, inspected the stretching of the dough, application of the sauce and portioning of toppings during the competition.  If the pizza was not perfect, it was returned to the competitor who remade the entire pizza while still being timed.

Grewal has been with Domino's for 22 years. He has been making pizzas since he was 13 years old.

"We are extremely excited to crown Pali Grewal as Domino's 2014 World's Fastest Pizza Maker," said Doyle. "Domino's and its franchisees employ some of the greatest pizza makers in the world. Our emphasis is on the quality of the pizza, while also using our expertise to get them made quickly. We are known as the 'delivery experts' and our goal for everyone in our stores is to get hot, great-tasting pizzas to customers' doors safely and efficiently. The World's Fastest Pizza Maker competition recognizes the champions that take pizza-making to an entirely different level."

The "World's Fastest Pizza Maker" competition was held at Domino's Worldwide Rally in and attended by more than 5,000 Domino's team members and franchisees from around the world.

Founded in 1960, (NYSE: DPZ) is the recognized world leader in pizza delivery, with a significant business in carryout pizza. It ranks among the world's top public restaurant brands with its global enterprise of more than 10,900 stores in over 70 international markets. Domino's had global retail sales of over in 2013, comprised of nearly in the U.S. and over internationally. In the first quarter of 2014, Domino's had global retail sales of over , comprised of in the U.S. and internationally. Its system is made up of franchise owner-operators who accounted for over 96% of the stores as of the first quarter of 2014. The emphasis on technology innovation helped Domino's generate approximately 40% of sales in the U.S. from its digital channels in 2013, as well as reach an estimated annually in global digital sales. Domino's recently launched its ordering app for iPad®, adding to an existing ordering app lineup that covers nearly 95% of the U.S. smartphone market. Continuing its focus on menu enhancement, Domino's launched Specialty Chicken in . 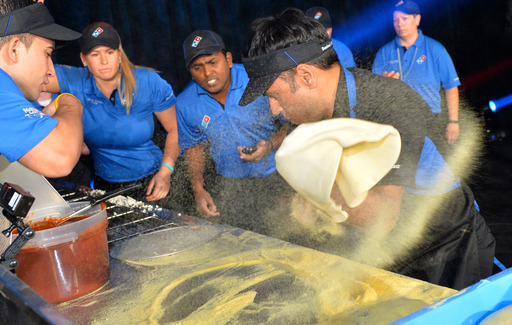 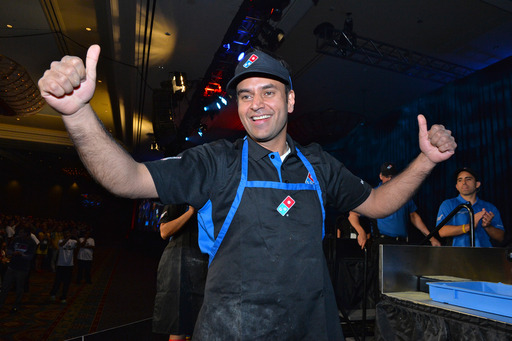 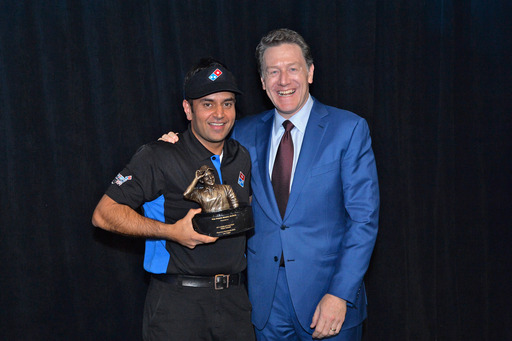 To view the multimedia assets associated with this release, please click: http://www.multivu.com/mnr/7226151-domino-s-pizza-crowns-world-s-fastest-pizza-maker