PDF Version
Customers, drivers and store managers all benefit from the new tool

, /PRNewswire/ --  (NYSE: DPZ), the largest pizza company in the world based on global retail sales, has spent nearly 60 years answering the question, "Where's my pizza?" Delivery customers need not ask anymore, as Domino's is piloting a test of GPS driver tracking, beginning today in 27 corporate-owned stores throughout . 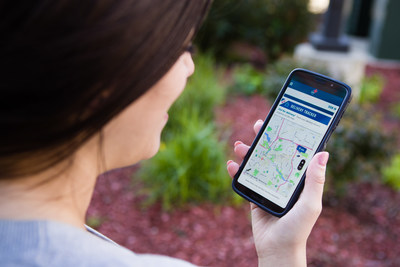 Customers who order from one of these stores can track the location of their order and driver via a map from the order confirmation page of Dominos.com or the Domino's app. They will also receive an estimated delivery time and can opt into SMS notifications that let them know when their order is about two minutes away.

"We're excited to offer this feature to our customers," said , senior vice president and chief digital officer. "Transparency on orders that are out on the road makes a big difference to customers, as well as drivers and store managers. With GPS tracking everyone can have the best possible delivery experience."

In addition to customer benefits, this piloted feature also benefits delivery drivers, as it provides optional navigation and one-touch customer callback capabilities. Store managers, meanwhile, will have a driver-tracking screen at the store that will show where all of their drivers are out on the road, allowing them to better manage store operations and make efficient deliveries.

The pilot will also be extended to select stores in three franchise markets later in the spring, including ; and the suburban - area.

About ®
Founded in 1960, is the largest pizza company in the world based on retail sales, with a significant business in both delivery and carryout pizza. It ranks among the world's top public restaurant brands with a global enterprise of more than 16,100 stores in over 85 markets. Domino's had global retail sales of over in 2018, with nearly in the U.S. and more than internationally. In the first quarter of 2019, Domino's had global retail sales of nearly , with over in the U.S. and nearly internationally. Its system is comprised of independent franchise owners who accounted for 98% of Domino's stores as of the first quarter of 2019. Emphasis on technology innovation helped Domino's achieve more than half of all global retail sales in 2018 from digital channels, primarily online ordering and mobile applications. In the U.S., Domino's generates over 65% of sales via digital channels and has produced several innovative ordering platforms, including Google Home, Facebook Messenger, Apple Watch, Amazon Echo, Twitter and text message using a pizza emoji. In late 2017, Domino's began an industry-first test of self-driving vehicle delivery with – and in , launched Domino's HotSpots®, featuring over 200,000 non-traditional delivery locations including parks, beaches, local landmarks and other unique gathering spots.