Score the ultimate touchdown with Domino's $5.99 mix and match deal

, /PRNewswire/ -- Large gatherings and parties may seem like a distant memory, but one thing remains the same: on the biggest game day of the year, football fans from all over the country will take a seat around their respective TVs and enjoy pizza, and Domino's (NYSE: DPZ) corporate and franchise-owned stores are ready to deliver. 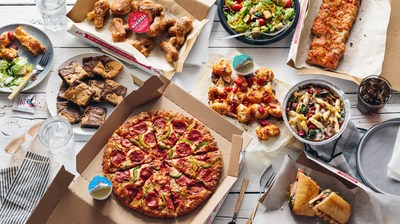 Whether you're ordering a meal for one or for your entire household, when it comes to delivering a satisfying game day feast, there's only one play to remember: Domino's mix and match deal. Football fans can please everyone by choosing two or more of the following menu items for just each: medium two-topping pizzas, Bread Twists, salads, Marbled Cookie Brownies, Specialty Chicken, Oven Baked Sandwiches, Stuffed Cheesy Bread, eight-piece orders of boneless chicken wings or pasta in a dish*.

"Football's favorite Sunday is consistently one of Domino's busiest delivery days of the year," said , Domino's spokesperson. "Domino's corporate and franchise team members prepare for this day, much like the final two football teams battling it out. It takes focus, practice, a great player lineup and extra hustle to come through on game day. Domino's stores across the country have prepared by staffing up, ordering extra ingredients and practicing the art of precision pizza-making."

Domino's is committed to providing a safe, delicious, hot meal the way customers want it – whether via contactless carryout or delivery. Stores across the also offer Domino's Carside Delivery™, which gives customers the option of staying in their vehicle while a team member delivers their order to them in the store's parking lot, making for a convenient, contactless carryout experience.

*Any delivery charge is not a tip paid to your driver. Drivers carry less than . You must ask for this limited time offer. Delivery charge and tax may apply. Prices, participation, delivery area and charges may vary. 2-item minimum. Handmade , bone-in wings and bread bowl pasta will be extra. Some crust types, toppings, sauces and premium items may come with an additional charge at participating locations.

About ®
Founded in 1960, is the largest pizza company in the world based on retail sales. It ranks among the world's top restaurant brands with a global enterprise of more than 17,200 stores in over 90 markets. Domino's had global retail sales of more than in 2019, with over in the and nearly internationally. In the third quarter of 2020, Domino's had global retail sales of more than , with over in the and nearly internationally. Its system is comprised of independent franchise owners who accounted for 98% of Domino's stores as of the end of the third quarter of 2020. Emphasis on technology innovation helped Domino's achieve more than half of all global retail sales in 2019 from digital channels. In the , Domino's generated more than 65% of sales in 2019 via digital channels and has developed several innovative ordering platforms, including those for Google Home, Facebook Messenger, Apple Watch, Amazon Echo, Twitter and more. In 2019, Domino's announced a partnership with Nuro to further its exploration and testing of autonomous pizza delivery. In mid-2020, Domino's launched a new way to order contactless carryout nationwide – via Domino's Carside Delivery™, which customers can choose when placing a prepaid online order.