“David's competitive spirit, proven on track performance and verve for racing made David our top choice for the No. 00 NASCAR NEXTEL Cup Series Toyota,” said car owner Michael Waltrip. “Dale Jarrett and I both feel strongly that David is the ideal candidate to cap off our driver line up. Like my and Dale's backgrounds, David appreciates coming from a deep-rooted and well respected racing heritage. It is my privilege to welcome him into the top NASCAR series. I know everyone at Domino's and Burger King Corporation will be pleased with what David can do on and off the race track.”

To become a NASCAR NEXTEL Cup Series competitor always has been a dream of the Zephyrhills-Fla., native, whose family has a deep-rooted racing history and ironically has a last name synonymous with the “00” number.

“In my wildest dreams I couldn't come up with a scenario that would have put me driving a ‘00' car especially with great sponsors like Burger King Corporation and Domino's in the NASCAR NEXTEL Cup Series,” Reutimann said. “I always thought how cool it would be to drive a car with my family number in the top series in the world, but what are the chances that would happen. It's right here in front of me. My grandfather, my father, my uncle and my cousins have all raced a car with the ‘00' number. It's our family number and if you're a Reutimann that's the number you race. I can't describe it. It's just such a great feeling. It's surreal and a thrill not only for me, but for my entire family.”

Reutimann and Domino's Pizza will kick off the 2007 season at Daytona International Speedway. Following the Daytona 500, Domino's will continue as the primary sponsor of the No. 00 Toyota Camry through the May race at Darlington Raceway. A Domino's paint scheme will also be carried on the No. 00 Michael Waltrip Racing entry in the August NASCAR NEXTEL Cup Series race at Michigan International Speedway. Domino's will deliver its final five races during the Chase for the NASCAR NEXTEL Cup Series championship. Domino's welcomes Reutimann as he competes for Raybestos Rookie of the Year honors. 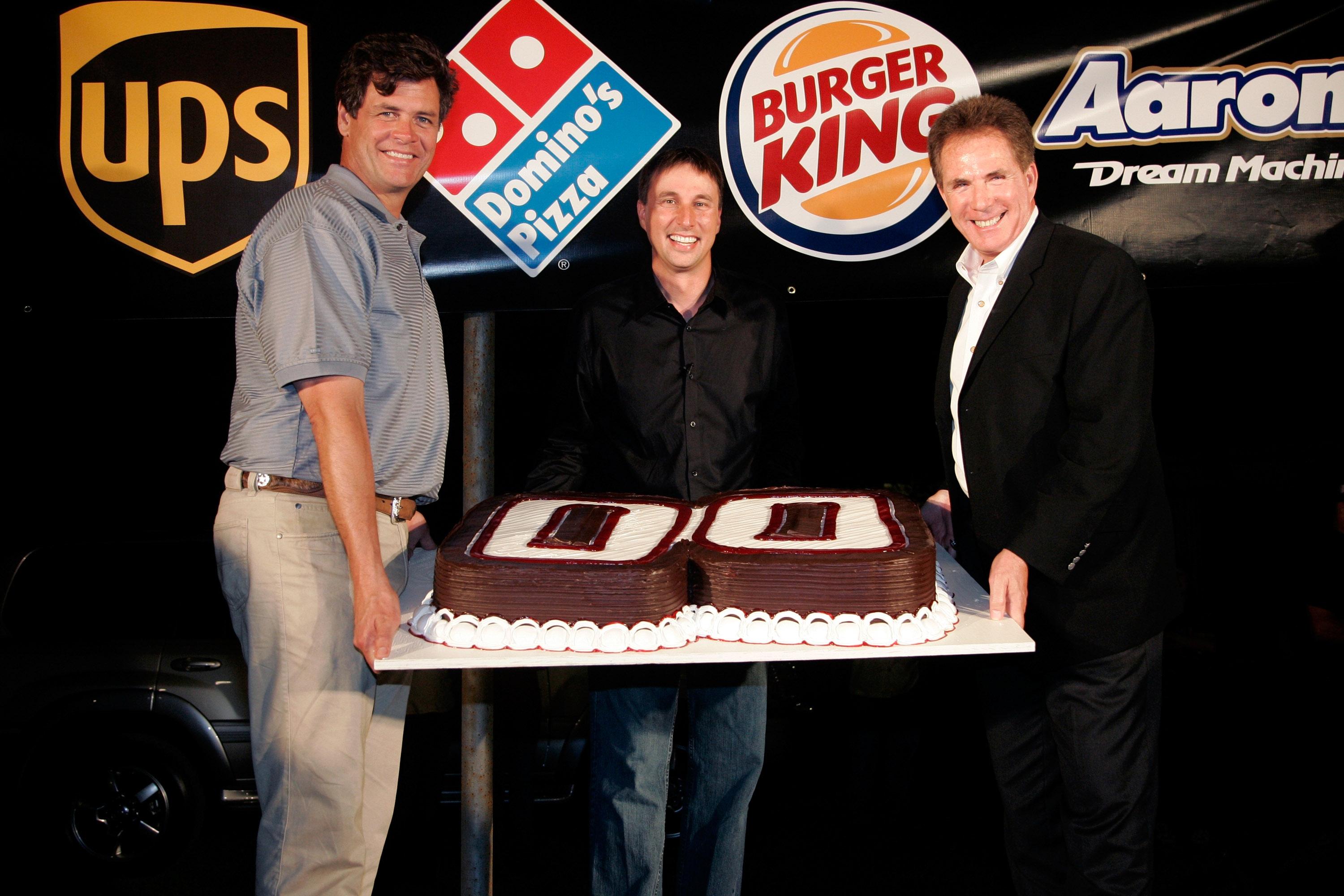 "We're thrilled to welcome David into the Domino's family and to be a part of the team that is bringing him into the NASCAR NEXTEL Cup Series," said David Brandon, CEO of Domino's Pizza. "His unbridled passion, strong work ethic, and dedication to delivering his best performance each and every week reflects the core values of Domino's franchisees and our team members. We're looking forward to our mutual success in 2007."

Reutimann and the No. 00 Burger King Toyota Camry will take to the track Memorial Day weekend at Lowe's Motor Speedway in Concord, NC, and cap off the regular season under the lights at Richmond International Raceway. Five Chase for the NASCAR NEXTEL Cup races, including the final race at Homestead-Miami Speedway, will feature the Burger King paint scheme. Burger King Corporation is looking forward to having the rookie don their colors in Victory Lane.

“David is a great fit for the Burger King brand and we look forward to working with him next season,” said Russ Klein, President, Global Marketing, Innovation, and Strategy. “He has demonstrated he knows what it takes to win races. Hopefully he can put the No. 00 car in winner's circle driving home the HAVE IT YOUR WAY® philosophy by giving fans the exciting season they want and expect.”

Reutimann made his NASCAR NEXTEL Cup Series debut with Michael Waltrip Racing last year at Lowe's Motor Speedway, his only Cup Series race starting 26th and finishing 22nd. He's been a regular on the NASCAR Craftsman Truck Series circuit since 2004, winning his first truck race at Nashville Superspeedway in the Toyota Tundra 200 last year. Reutimann is now running for the NASCAR Craftsman Truck Series championship while competing in the NASCAR Busch Series on a limited basis. Next season that changes. In addition to running full-time in the NASCAR NEXTEL Cup Series, Reutimann will also pilot the No. 99 Aaron's Dream Machine in the NASCAR Busch Series and race the entire schedule.

“I'm thrilled to be able to drive for Aaron's,” Reutimann said. “We've had a few good finishes this season already. The team is doing well and I can't wait to start the season fresh to run for the championship. It's awesome that I get to run both Series full-time.”

Reutimann knows he has a lot to learn and is thankful for the two distinguished drivers he has to count on.

“I have a two-time Daytona 500 winner (Michael Waltrip) and a former NASCAR NEXTEL Cup Series champion (Dale Jarrett) to get advice from,” Reutimann said. “I feel like Dale and Michael are two of the best guys in the business to go talk to about things on and off the racetrack. I still have Darrell (Waltrip) I can go to who has been there for me many times. I'll get their advice and look to all of them for their leadership. They are all invaluable people and I'm looking forward to working with them. I have a lot to learn and they have a lot to teach.”

About Michael Waltrip Racing
Michael Waltrip Racing enters multiple full-time Toyota Camry entries in 2007 during Toyota Motorsports' inaugural year in the NASCAR NEXTEL Cup Series. Beginning as a modest family-owned operation in Sherrills Ford (N.C.) nearly a decade ago, Waltrip's team developed quickly into a top-notch winning organization. After overseeing a winning NASCAR Busch Series team, Waltrip raised the bar for Michael Waltrip Racing and began fielding cars in the NASCAR NEXTEL Cup Series on a limited basis. His trial run as a NASCAR Cup Series team owner was the driving force behind his vision to become a full-time owner.

About Domino's Pizza
Founded in 1960, Domino's Pizza is the recognized world leader in pizza delivery. Domino's is listed on the NYSE under the symbol “DPZ.” Through its primarily franchised system, Domino's operates a network of 8,190 franchised and Company-owned stores in the United States and more than 50 countries. The Domino's Pizza® brand has been named a Megabrand by Advertising Age magazine, and had global retail sales of nearly $5.0 billion in 2005, comprised of approximately $3.3 billion domestically and $1.7 billion internationally. Domino's Pizza has been named "Chain of the Year" by Pizza Today magazine, the leading publication of the pizza industry and is the "Official Pizza of NASCAR®." More information on the Company, in English and Spanish, can be found on the Web at www.dominos.com.

About Burger King Corporation
The BURGER KING® system operates more than 11,100 restaurants in all 50 states and in more than 65 countries and U.S. territories worldwide. Approximately 90 percent of BURGER KING restaurants are owned and operated by independent franchisees, many of them family-owned operations that have been in business for decades. To learn more about Burger King Corporation, please visit the company's Web site at .